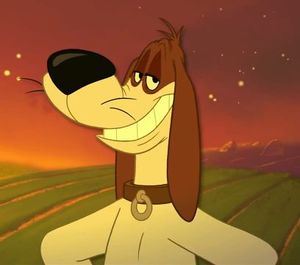 Barnyard Dawg as seen in The Looney Tunes Show.

(The) Barnyard Dawg (also known as George P. Dog) is a Looney Tunes character. An adult anthropomorphic basset hound, he is the archenemy of Foghorn Leghorn.[2] He was created by Robert McKimson, who also created Foghorn, and was voiced by Mel Blanc. Dawg also feuds with other enemies as well like Henery Hawk, the Weasel, Daffy Duck and Sylvester. He appeared in 22 Golden Age–era Warner Bros. shorts.

Dawg's first appearance came in Walky Talky Hawky (1946), the same Henery Hawk cartoon in which Foghorn himself first appeared. Although, in that cartoon, Dawg initiates hostilities with Foghorn by dropping a watermelon on his head (prompting Foghorn to grumble "Every day, it's the same thing!"), Dawg is usually seen sleeping in his kennel at a cartoon's beginning, with Foghorn provoking him by slapping his hindquarters with a wooden fencepost, setting the stage for Dawg to seek vengeance, often by manipulating Henery Hawk.

Dawg, called "Mandrake," was cast as pet to Porky Pig in 1947's One Meat Brawl, where the pair pursue one-shot star Grover Groundhog, who gives the hunting dog a sob story ("Wife and 72 children!...No coal in the cellar...!") that has him weeping sympathetic tears, much to Porky's disgust. Dawg/Mandrake uses this ploy himself in 1949's Daffy Duck Hunt, where, still Porky's pet and hunting companion, he persuades Daffy Duck to play along at being captured so he can avoid punishment from Porky, promising to free the duck later. However, once Daffy is tucked into Porky's freezer, Mandrake goes back on the bargain, although Daffy has little trouble outwitting both him and Porky. Although Dawg usually sports a gruff New York City accent in the Foghorn Leghorn shorts, in Daffy Duck Hunt he speaks mostly with a Southern accent (only one line, "I'll fix that dirty duck!", is rendered in his usual voice).

In 1958's Don't Axe Me, Dawg, now the pet of Mr. and Mrs. Elmer Fudd and renamed "Wover," again matches wits with Daffy after convincing Mrs. Fudd to designate the duck as Sunday dinner; surprisingly, Daffy is the loser in this cartoon, although he escapes doom when a guest requests a vegetarian meal instead. In 1958's Gopher Broke, Dawg is the subject of "psychological wearing down" by the Goofy Gophers, Mac and Tosh, who are trying to get their vegetables back. After the gophers initiate phase no. 4 of their plan, which leaves Dawg on top of a telephone pole, he flips out and flies off (literally) after a crow, causing a deadpan pig, who's been witnessing the aftermath of the gophers' abuse against Dawg, to also flip out. While the pig has gone to see an animal psychiatrist, the doctor sees Dawg fly by his window and also flips out enough to join the pig on the couch.

Henery mistakes Dawg for a chicken in The Foghorn Leghorn, because his father told him that chickens are great big monsters with real huge teeth who live in caves. Henery notices Dawg's mouth and presumes Dawg's doghouse is a kind of cave.

Although Dawg is normally portrayed as the straight man for Foghorn's pranks, in Mother Was a Rooster, he is portrayed in a very negative light, as he not only steals an ostrich egg (he justifies this by explaining that it's been kind of dull round the farm lately, giving reference to his four-year peace between him and Foghorn between Weasel While You Work and Mother Was a Rooster), he mocks the hatched ostrich, which Foghorn has adopted, and cheats in a boxing match with the rooster.

Dawg also appeared in Space Jam as a member of the Tune Squad, and in Looney Tunes: Back in Action playing cards with other dogs in Yosemite Sam's casino. In Baby Looney Tunes, Dawg appears as a puppy who chases the cool roosters, until Foghorn Leghorn shows the cool roosters how to deal with dogs (through a game of fetch), and instead of joining them, just befriends Dawg.

Barnyard Dawg first appeared in The Looney Tunes Show episode "Fish and Visitor's" Merrie Melodie's segment, "Chickenhawk" singing voice by Ben Falcone. He had a brief cameo at the end of the segment where it was shown that he sang the song the whole time. He later appeared in "Reunion's" Merrie Melodie's segment, "Cock of the Walk." In "Father Figures," Barnyard Dawg made a cameo as the umpire in the Father/Son Tennis Tournament final between Bugs and Walter Bunny against Daffy Duck and Foghorn Leghorn.

Barnyard Dawg was originally voiced by Mel Blanc, from the character's debut, until 1963; however, Daws Butler recorded the character's voice in a 1957 cartoon. After Blanc's death in 1989, the character has been voiced by Frank Welker, Jeff Bergman, Billy West, Greg Burson, Joe Alaskey and Ben Falcone.