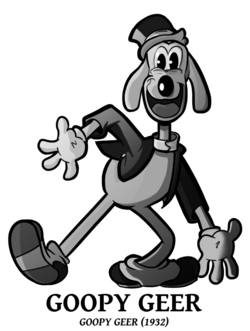 Goopy Geer is an animated cartoon character in the Looney Tunes and Merrie Melodies series of cartoons from Warner Bros. The character is a tall, lanky humanoid dog with scruffy whiskers and long, expressive ears. In all of his animated appearances, Goopy is depicted as light colored, but in an early promotional drawing for his first cartoon, he had black fur. A month after Goopy Geer's first cartoon had been released, Walt Disney released a cartoon with a character, named Goofy, whose overall appearance was very similar to that of Goopy Geer; due to the close proximity of the two cartoons' releases, there is little chance that either character was intended to be a copy of the other.

Goopy Geer was the last attempt by animator Rudolf Ising to feature a recurring character in the Merrie Melodies series of films. Like most other early sound-era cartoon characters, Ising's Goopy has little personality of his own. Instead, he sings and dances his way through a musical world in perfect syncopation. Ising only featured the character in three cartoons. In the first, "Goopy Geer" (April 16, 1932), he plays a popular pianist entertaining at a nightclub. In Ising's other two Goopy films, both in 1932, he cast the dog first as a hillbilly in "Moonlight for Two" (June 11, 1932), then as a court jester in "The Queen Was in the Parlor" (July 9, 1932). All of these cartoons also feature Goopy's unnamed girlfriend who debuted without her gangly consort in the earlier Merrie Melodie "Freddy the Freshman" (February 20, 1932). Goopy would make a cameo in the Bosko cartoon "Bosko in Dutch" (January 14, 1933), but after Ising left Warner Bros. that same year, Goopy and other recurring Merrie Melodies characters were retired, to be later replaced by such recurring characters as Sniffles the Mouse, Inki and the Mynah Bird, the Curious Puppies, and, on two occasions, Porky Pig (a character who was certainly more prevalent in the black and white Looney Tunes). Many of the Merrie Melodies nonetheless remained high-quality one-shot cartoons, until 1943, when the Looney Tunes and Merrie Melodies merged and became generic.

Goopy Geer had a small role in the 1990s animated series Tiny Toon Adventures. In the episode "Two-Tone Town" (September 28, 1992), Goopy, reprising his role as the happy-go-lucky pianist from his first cartoon, meets the series' stars when they visit the "black-and-white" part of town. His appearance in this cartoon is updated somewhat, and seems to be based on early promotional drawings where his fur is black, rather than his actual cartoon appearances. voiced by Bill Farmer.