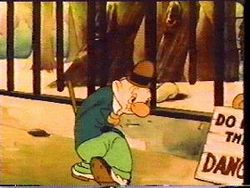 Egghead at the Zoo

Egghead is a character in the animated cartoon series Looney Tunes, created by Tex Avery.

Avery used Egghead in several pictures such as Daffy Duck and Egghead, Cinderella Meets Fella, Yankee Doodle Daffy, Hamateur Night, and A Day at the Zoo, all in the late 1930s. Egghead debuted in the 1937 cartoon Egghead Rides Again. Egghead initially was depicted as having a bulbous nose, funny/eccentric clothing, a voice like Joe Penner, and an egg-shaped head (thus the moniker "Egghead"). Egghead alternated from having a Moe Howard haircut to being bald and wearing a brown derby, a baggy suit, and a high-collared shirt. His voice, laugh, and mannerisms were very much like those of Joe Penner. Egghead is thought to be the prototype of Elmer Fudd. Egghead himself returned decades later in the compilation film Daffy Duck's Quackbusters. More recently, he also made a cameo appearance at the end of Looney Tunes: Back in Action and was then also given in his own story, which starred him alongside Pete Puma, in the Looney Tunes comic book.

Egghead has the distinction of being the very first recurring character created for Leon Schlesinger's Merrie Melodies series, which had previously contained only one-shot characters.

He was voiced by Arthur Q. Bryan and later Danny Webb, also now by Tom Kenny.